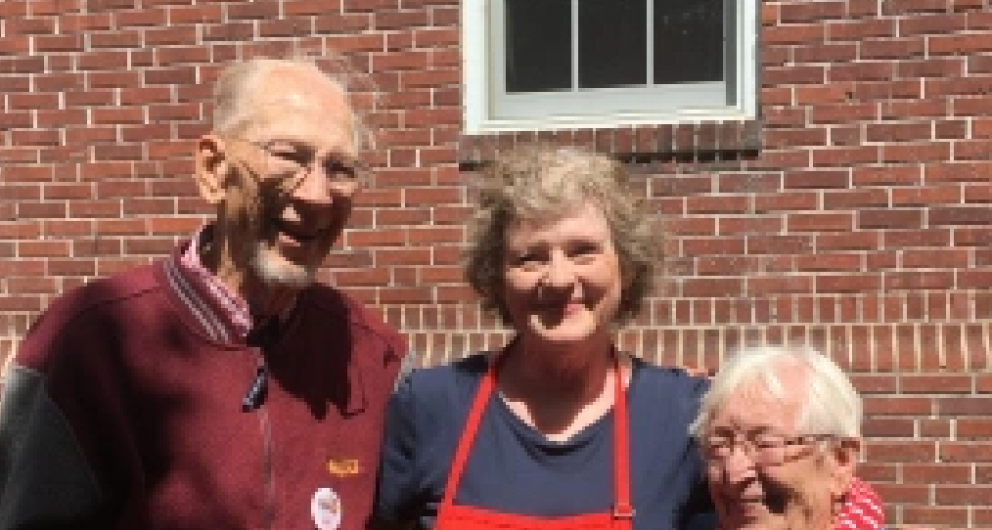 The Danish American Center is a community of mostly like-minded people. We know one another and enjoy one another's company on many levels. We know, or at least think we do, who can do what and whom we can trust for all the variety of jobs it takes to keep the Center running smoothly. We gather for celebrations such as today, and we use our center for birthday parties. We have huge Julefests, luncheons and akvavit tasting parties. We practice and live & "hygge" while strangers try to figure out what it is, how to pronounce it and why it's so essential to happiness. And once a year, we choose someone who has helped make all that happen and call them, Dane of the Year.

Counting on volunteers to step up when needed is how the DAC works. So if, when my task is staffing those volunteers, for æbleskive breakfasts, for example, my job is quite easy as this Dane of the Year even volunteers before being asked. This Dane of the Year has been active in supporting DAC participation in the annual Christmas exhibits at the American Swedish Institute, has served on the DAC board and has been instrumental in ensuring Virkelyst's survival as we moved to be part of the DAC and in celebrating our 80th anniversary.

This recipient's Danish roots swept her up in their safety and enrichment when she was but a toddler, growing up in Chicago. Her mother steeped her in the power of her grandfather, S.D. Rodholm's theology, celebrating his Grundtvigian roots as well as his creative genius as a prolific translator. Her family nurtured these roots by returning to Danebod Family Camp, the Folk Meeting, and West Denmark Family Camp as well as sending her to Grand View College. This recipient has had a career in education, teaching in Cedar Rapids IA before moving to Minnesota where she taught special education in the Wayzata schools. She and her husband Bob have two daughters Emma and Laura. After retiring and selling their home in Minnetonka, they split their time between homes on the north shore of Minnesota, in Green Valley, Arizona and the Danish American Center where she stays when in town, just in case a volunteer opportunity arises.

Please join me in congratulating my friend of 60 years Renee Showalter-Hanson as Dane of the Year for 2018.

They have made sandwiches and æbleskiver, taught kids to folk dance, raised money through everything from taste testing to rummage sales. They have worked at Festival of Nations, done the set up and take down of Danish Day at Wabun Park, and hosted visiting Danish Royalty. Now they participate in the DAC Wednesday lunches, monthly breakfasts, Christmas celebrations, annual meetings and sing alongs.

And they have been generous…Lis has shared her story of coming of age and living in Denmark during the German occupation with audiences at the Danish Center, Mindekirken, and other organizations. In addition to donating their time, have given a wonderful Danish painting of a ship at sea to our collection.

All the while, they are promoting the Danish American culture and welcoming anyone who walks through the door of the DAC. They are true ambassadors! Please join me in honoring Lis & Whitey Jorgensen as Danes of the Year.